Ok, this is too funny to not mention.

I’m roaming around Slashdot and come upon a story talking about one of the greatest pieces of phantomware in the world of computers, the long-awaited and almost-guaranteed-to-be-useless update to Microsoft’s “graphical DOS shell”, Windows. Yep, it’s an article on Longhorn.

In the article, one of Microsoft’s VPs, Jim Allchin, is talking about how great Longhorn is. If he could only hear himself…

I love this paragraph:

Allchin, a wiry-built 54-year-old who has been in charge of Windows for almost a decade, is admirably blunt about his own frustrations using the current operating system. It annoys him, for example, that the adjustments necessary to move a laptop from a work to a home network aren’t obvious. Longhorn, he said, will make that process easy, along with many other common tasks. If you want a Longhorn machine to automatically configure itself so you can work in a coffee shop, it will. If you put in a DVD, the volume will automatically adjust and the video will just start playing full screen. “You shouldn’t have to spend a lot of time struggling with things,” Allchin said, adding that the number one design goal for Longhorn has been: “It just works.”

Aw, poor Microsoft. They’re only like, what? 20 years late? Heh. And yes, the Windows world is going into “AUTO” mode… Your computer will defrag your hard drive without you telling it to, in the background, most likely when you’re using a file that it’s trying to defrag, causing the computer to crash. “There will be lots of little goodies for home and work,” he says. Yes, many of which will be focused on “security”. Uh-huh. I’ll bet. You’ll be able to (yes, get this…) put a single file in multiple folders simultaneously. (Wufa?!?) It’s in the name of being able to “find the one [file] you want with much more ease than you can today”. It makes you wonder what those “innovative” guys in Redmond are thinking. And no, I don’t even have to mention how silly the “transparent windows” concept is.

But of course, in true Microsoft fashion, when Longhorn finally hits shelves (is it late 2006? 2007? Who knows nowadays…), you’ll be assaulted by this:

A major ad campaign slated to start in coming weeks will trumpet the notion that you can do many great things using Windows. Allchin called it a “celebration.” But the company will launch an even bigger campaign next year in support of Longhorn. “We’ll put massive emphasis on this in terms of marketing and dollars,” Allchin told me.

Marketing and dollars. For a half baked “idea” for an “operating system”. I like the wording there. The “notion” that you can do many great things with Windows. Great things. Heh. And the funnier part? People are going to pay for the privilege.

It’s all about innovation. And “it just works.”

This, ladies and gentlemen, beyond my work in the media production world, is why I use a Macintosh. The real “Longhorn” will be here in 7 days. It’ll be orange with black stripes. And I’ll be at the local Apple Store to celebrate the latest and greatest from a REAL group of innovators. 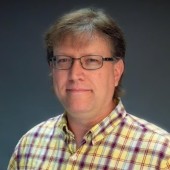